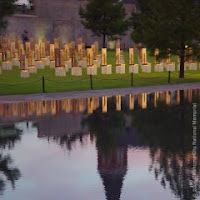 I was part of a corps of 150 fire chaplains marching behind a drum and bagpipe corps under crossed ladders into the Methodist church across the street from the Oklahoma City Memorial (Murrah bombing site) for a memorial service tonight. Remembered were fire chaplains who had died in the last year and all LODD firefighters from the US and Canada, with each name being read aloud.
Afterward we walked across the street to again spend time at the Memorial, which is beautiful at night with its reflecting pool, arches and lit markers for each life lost.
Prior to the service we were treated to Oklahoma barbecue at OKCFD Station 1. It was good, but I refrained from telling them they "ain't ate barbecue until they've ate barbecue" from eastern NC. I didn't want to hurt their feelings. It was my random act of kindness for the day. Being with all these chaplains brings out the merciful side of me.
Posted by Rick Lawrenson at 10:17 PM