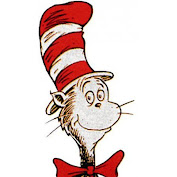 Been reading about Dr. Seuss becoming a victim of the cancel culture.

It reminded me of literature I read in my youth.
I recently found a very old (early 20th century) edition of Mark Twain's "Huckleberry Finn". I read this book over 50 years ago (along with Tom Sawyer) and understood then the times were different, and that the racist language and imagery reflected those times, not that the times made racism right.
But reading them was very educational for me, a jr. high boy in the mid-60's... a time
when we were learning to move away from those past injustices.
Context is everything. We can teach our children a lot by remembering, not canceling history.
Posted by Rick Lawrenson at 2:41 PM No comments:

Finding the line between conspiracy and truth

Recently I was challenged on social media to expose and condemn a group known as QAnon.  I had no idea who or what that was, partly because I don't spend time reading conspiracy theory claims that pop up, often from my Christian friends.  And those theories, as you know, abound.  Then I saw where some of the arrestees from the recent mayhem at the Capitol were identified with this group, so my curiosity was peaked.

Today this showed up on my news feed.  It's an article from a trusted source about QAnon.  Since I was challenged to expose/condemn them, I felt it wise to learn about it.  And I realized not only did I have no idea about it, I think I have many friends who have swallowed this particular flavor of Kool Aid.  And I am sure that such conspiracy nonsense and mindless biases lacking reason are on both sides of the spectrum.

Anyway, here is the link to the article.  And remember, "there is none so blind as he who will not see".  Beware of false prophets.

Posted by Rick Lawrenson at 8:35 AM No comments:

Fist Shaking is Not the Answer

While watching current events unfold (and reactions to them)...
American evangelicals have (for generations) had a "worldview" that supposes God treats us as His favorite children. We watch horrible persecution of Christians in other countries and we pray for them. But, when a little persecution begins to percolate on our shores we proclaim the Rapture is almost here, as though hard times for the American Christian are more than God can bear, so He must act now.
We're so full of ourselves. Rather than shake our fists at the world acting like the world, perhaps it is time to repent and become full of Christ.
Posted by Rick Lawrenson at 11:16 AM No comments: