In 2008 my daughter-in-law, who has lived her entire life with Cystic Fibrosis (a disease inherited from parents who were carriers of the gene) found herself at the point of being put on the lung transplant list at Duke University Medical Center.  Adding to her dire condition was her pregnancy.  She wasn’t supposed to get pregnant.  Her doctors warned her not to get pregnant.  And after years of trying, she and my son assumed she was unable to conceive due to her disease.

But, on the eve of a scheduled trip to Duke to be evaluated and likely placed on the transplant list she discovered she was, indeed, pregnant.  The next day the doctors expressed their dismay.  One even cursed when hearing the news. The obstetrician there said she had never recommended termination before.  But this time she said, “You can’t risk your life like this.  You need to abort.”  Due to their deeply held conviction that life is sacred, especially in the womb, they told their doctors, “No.”

In January 2008 she was at the place where her diseased lungs could no longer supply her with the oxygen she needed.  The growing child inside her (not part of her body, but housed within her) only exacerbated the limited air her lungs could take in.  So, the plan was to intubate her, putting her on a ventilator to breathe for her.  The doctors told her this had never been done at Duke – placing a pregnant patient in need of a transplant on a ventilator.  In fact, they told her by doing this, her chances for receiving a transplant were near impossible.  Again, it had never been done.

Less than an hour before the surgery to ventilate her she and my son were told they had to make a choice.  If her vitals dropped to dangerous lows during surgery, who should be saved, mother or baby?  They were told that if she began to crash, they would perform a Caesarian.  But there were no guarantees that either would/could survive.

We hear a lot of arguments for terminating a pregnancy revolving around protecting the life of the mother.  With that rationale no one had a greater justification for aborting than my daughter-in-law.  The baby was just barely 24 weeks.

Prior to going to surgery our son and his wife called my wife and me into her room in ICU.  “What do we do?”  I don’t know that I’ve ever been asked a harder question.  But my belief is that God alone has the authority to determine life and death.  So, to the doctors’ question their response was, “Do everything you can to save them both”.

My granddaughter was born just after noon, weighing in at 1 lb. 6 oz.  Her chances of survival were slim.  Her mother was successfully intubated and place on a ventilator.  Her chances were equally small.  Nearly three months later she would “write the book” at Duke and receive new lungs.  Four months later her daughter would be released from the NICU to come home, and today she is a beautiful 5th grader. 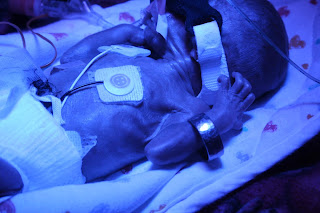 Life’s not fair.  Sometimes the choices we must make are next to impossible.  But, we’re not God, who alone can accomplish the impossible.  He’s the same God who declares that He created us knew us when we were in our mothers’ wombs.

Readers of my column, my blog and those who have heard me preach know where I stand on the the abortion issue.  For me, it is not a political hot-potato as much as it is a moral and ethical issue.  Of course, being a man whose faith has determined my personal worldview, and whose faith is grounded on the concept of absolute truth, I clearly see the abortion of pre-born as a violation of the basic building block of our society that every man and woman has the right to life.

Lest someone suggest that I sit in some sort of ivory tower without the experience or understanding of life circumstances that might justify the termination of a pregnancy, please know that because of my family, I have been up close and personal with the options -   closer than I would ever want or choose to be.

I believe we have reached a tipping point in our country.  The state of New York has now legalized abortion up to the point of birth at full term.  In New York, convicted murderers cannot be put to death.  But now, unwanted, innocent children can be and will be.

Reaction will either be for other states to follow their lead or for this national sin to be reversed.  Our soul, our future is in dire jeopardy if this is allowed to continue.  May God have mercy on us.