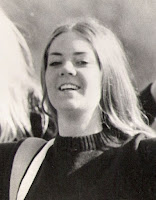 When we met in November Gail was coming off of an on-again-off-again long term relationship.  Not being in the same social circles at school we had not met prior to my becoming her co-worker.  I might have bought a donut or two from her my freshman year when the cheerleaders sold donuts in the dorm to raise funds, but I don’t remember.  I did, however, know who she was, since she had cheered my first two years at school.  And it was a small school in those days, not much bigger (or smaller) than most high schools.  Everyone knew who the cheerleaders were.

We weren’t much more than acquaintances from our time working together before the holidays.
So, it wasn’t my business, nor did I know that she was unattached romantically.  And, honestly, as I said in the earlier post, I wasn’t interested.  But, she was coming off an on again-off again relationship of a couple years when we met.

After finals, Christmas break came and I got lots of extra hours at work.  The other students were gone for the holidays, and being a local resident with nowhere to go, I worked.  For Gail, it was probably the first Christmas in a long time when she didn’t have a boyfriend.  My hunch is that during that week or two while she was at home she came up with a plan.  Unbeknownst to me, I was part of the scheme.

Such are the wiles of a woman.

After her break-up she had been out with another guy, but it wasn’t anything she wanted to continue.  Like most young ladies, who struggle with telling a guy “thanks, but no thanks”, she wanted to let it be known that she was not in a committed relationship to anyone.  And how would she do that?  Oh, yeah. The plan. (At least this is how I surmise what happened.)

So, it’s after Christmas break, sometime in January, and I get asked this question: “Would you go with me to a basketball game so others can see I’m not dating so and so.”  In essence I was a decoy.  IF (big IF) she had any interest in me at all, I had no clue.  You’ll have to ask her,  I saw it as an opportunity to do a friend a favor.  And honestly, I wanted to hear from my friends when they saw me at the game with Gail.  As one later asked me, “Aren’t you a bit out of your league?”.

So, I agreed to escort her to the game at Jefferson Forest High School, where Liberty Baptist College played its home games.

Posted by Rick Lawrenson at 6:51 PM