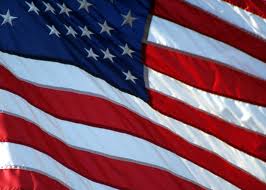 I just read a story about a NPR reporter who sat and worked on his laptop as the National Anthem was being played/sung at a campaign rally.  It's stirred up some controversy.  Rightly so, I think.

Basic respect, not only for the flag and the nation it represents also must include respect for those citizens around you.  The simple act of standing shows respect for those who put their lives on the line and died so that flag could still be raised.  You don't have to agree with what America is or has become.  Just show some respect.

When I was a middle school student my family lived on an Army post.  (Yes, my dad is a Marine.)  I played Little League baseball, and our field was across the street from the parade field.  A parade field on a military installation is where the post's or base's central flag pole is located.  Every day, as I recall at 6PM (1800) there was a blast from the cannon beside the flag pole and a bugler began to play Retreat.  Following Retreat as the flag was ceremoniously lowered, the bugler played To the Colors. *

I heard this just about every Spring evening.  With the cannon blast we immediately stopped practicing/playing. Turning toward the flag we removed our ball caps and placed them over our hearts throughout the bugle's call.  Cars in the vicinity would come to a stop in the street and their occupants would actually get out and stand at attention, saluting if in uniform or hands over hearts if not.

That daily experience, along with our coaches (who were military men) taught me respect for our flag.  Today 45 years later, as I stood in formation with fellow firefighters saluting Old Glory during the Pledge and the singing of The Star Spangled Banner in a ceremony honoring our veterans I still felt that same respect I learned as a boy.  My chest still swells with pride and gratitude for our great country.

Who teaches our children such things today?  Apparently no one taught the reporter.  He doesn't know what he is missing.

Here's a link to the various bugle calls used by our military.  You'll get an explanation and an audio clip for each.  Some, you'll discover are familiar to most of us.  I understand that had a band been on the parade field The Star Spangled Banner would have been played in lieu of To the Colors.
Posted by Rick Lawrenson at 9:58 PM 2 comments:

I'm voting for change this time

WARNING: I'm making political statements here.  If that bothers you, don't read it.

Sometime tomorrow, God willing, I'll head over to our town hall and cast my vote for Romney and Ryan.  If you care, I'll tell you why.

1.  President Obama's administration has consistently chipped away at religious liberties over the past 4 years.  It appears that the Constitution is irrelevant under his leadership.

2. President Obama's administration has pushed for the acceptance of a redefinition of marriage, something that has been in place for the entire history of mankind in every culture.

3. President Obama has signed on to legislation promoting the ongoing slaughter of the unborn in our country.

4. Something terribly wrong happened in Libya on Sept. 11, and we have been lied to about it repeatedly.  Americans deserve to know the truth.

5. I'm no better off financially than I was four years ago.  But, at least I still have a job.  Yet the numbers of unemployed Americans continues to grow and the small businesses that can provide real economic stimulus are suffering.  The economic "stimulus package" only put us farther in debt as a nation.

6. The promise of a transparent administration has never materialized.  In fact, just the opposite has happened, with executive orders bypassing our Constitutional government process.

7. I'm a capitalist, not a socialist.  Let free enterprise, not governmental agencies solve what ails our economy.

8. I wish everyone adequate health care.  But I do not believe those of who can pay for our own should also pay for those who can't or won't.  Let's find a better solution.

9. Gov. Romney is a proven business man, and has been chief executive of a state government.  He will come into this job with more experience than Pres. Obama had four years ago.  We need someone with Romney's track record to turn things around.

10. Joe Biden is one heartbeat away from the Oval Office!
Posted by Rick Lawrenson at 10:10 AM