Some of my Heroes

Early in my ministry God took us to serve in Tulsa, OK at the Tulsa Baptist Temple, a large church led by Clifford Clark.  Pastor Clark was a champion for world missions like none other I've ever known.  And while I received a great indoctrination into the priority of world evangelization at the churches I grew up in and served, TBT took that up a notch.

It was in this church in 1965 that youth pastor Roscoe Brewer took a large group of American teens to Mexico to distribute Bible in a program he called SMITE - Summer Missions Intern Training for Evangelism.  Brewer would take SMITE with him to Lynchburg Baptist College (now Liberty University) in the '70's and it became the world missions arm of the young college.

Each January the church hosted a world missions conference, and missionaries from all over the world were brought in to share what God was doing where they served. At those conferences I was privileged to sit and converse with and mostly listen to "hall of fame" missionaries like Manuel Arenas, Granny Holdeman and Rachel Saint.

In the picture, from a Tulsa Baptist Temple newsletter, Rachel Saint is center front row and Granny Holdeman is on the right front row, standing next to Pastor Clifford Clark.  I'm there, too, on the far right of the third row. The guy with no tie...can you believe that?

My days at this church ('78-'80) were instrumental in forming my own missions strategy which I put into practice in my 30 years at Nags Head Church.

(Click on the picture to see all of it.) 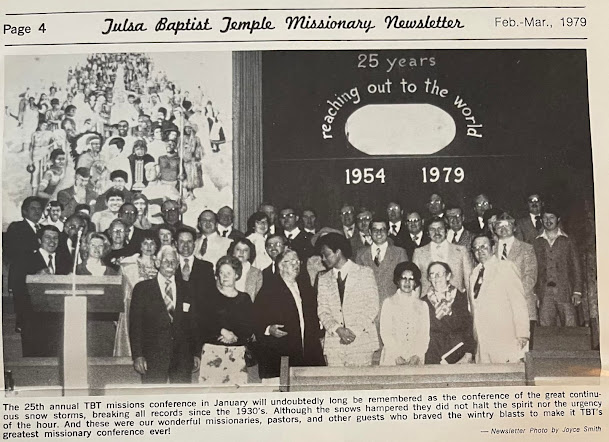 Posted by Rick Lawrenson at 2:03 PM No comments: