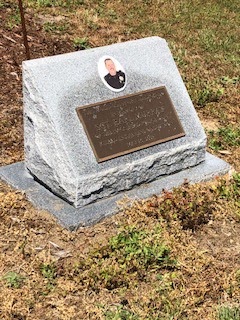 and the location in Nags Head as I snapped out of slumber.  But did she really say “officer down”?  I asked the question aloud to my wife, Gail who was also awakened by the dispatcher’s voice.

Her reply was, “I think so”.  I had never heard that over the radio before, but I knew what it meant.  So, to confirm, I made a phone call to Dare County Communications.  “This is Chaplain 16.  Did that call come out as an ‘officer down’?”  The answer was affirmative.  I had to ask...”Who is it?”

I hurried to get dressed and got in my car to make the 15 minute drive to Nags Head.  On the way I called our police chaplain, Jim Lewis to let him know and to get him to the location as well.

Lots of blue and red lights were clustered on the east side of the highway.  There were more cops than I had seen at one incident.  They all heard the radio as well, and from other towns and the county they came to do whatever they could.  Our fire engines and crews were there and the firefighters were taking turns trying to save Earl’s life.

A few feet away was his mangled patrol car, wrapped around a concrete utility pole.  It had rained hard, and in route to a burglary in progress Earl’s car had hydroplaned.  My friend, a frequent attender at my church and one of the best cops around died there, surrounded by his public safety family, most of whom were crying and in shock.

Sgt. Earl Murray was a career police officer.  A family man with a wife and two daughters in their late teens.  He also was a believer in Jesus.  And he was our first and only police officer to die in the line of duty.  Ten years ago today, and the memory of that early morning still brings tears to my eyes.

With the chief I was dispatched to Earl’s home in Kitty Hawk to bear the news to his wife and girls.

The next few days were a blur as we ministered to the family, our fire and police departments and worked on a LODD funeral that would honor this hero.

This morning I stopped at the benches along the highway where a memorial bears his image and name.  There I sat for a few minutes remembering my friend, and then praying for his family and our law enforcement officers.  I was glad to see Old Glory flying at half-staff today honoring all in law enforcement who have given all to protect and serve us.

Buddyro, I won’t forget you.
Posted by Rick Lawrenson at 9:16 PM No comments: