A giant in the Christian community died today.

I was fortunate to have been a high school student in Orange County, CA in the early 70's and saw firsthand the explosion and impact of Calvary Chapel in the lives of young people. Those were the days of the tent, as they outgrew their little church building and began to build something much larger.  Under Chuck's leadership Calvary Chapel was the epicenter of the Jesus Movement that reached kids from coast to coast. My estimate is that 25% of the student body of my high school were born again Christians - and not shy about it - and most of them were reached by Calvary Chapel.

After graduating from a Baptist college on the East coast I went back to my home church in Orange to serve as youth pastor. Frequently I made the drive over to Costa Mesa to check out Chuck's teaching on tapes. His commitment to the Word was so strong. And even though we did not agree on some issues, I learned you do not have to be my twin to be my brother. 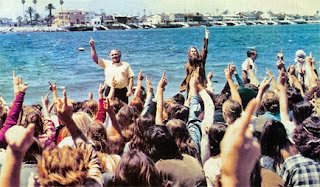 My generation of Christians owes a debt of gratitude for Chuck's vision and pioneering spirit. Contemporary Christian music can point back to Chuck's willingness to let long-haired newly-saved rockers sing their from their hearts and lead in worship. Maranatha! Music, started by Chuck, became the grandfather of our worship music today.

Like all visionary leaders Chuck wasn't without controversy. But he always pointed others to Christ and lived his life with integrity. I imagine that should Jesus one day ask all in heaven who were reached with the Gospel by ministries birthed and nurtured by Chuck Smith to stand, the rest of us will be in awe at the multitude on their feet.

He's certainly heard the words, "Well done" from his Savior.

Posted by Rick Lawrenson at 12:06 PM No comments: