Memorial Day: More than just a day off 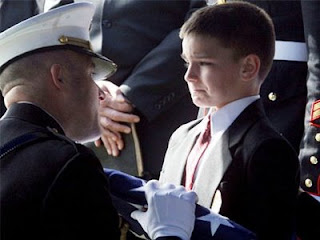 Because of my role as chaplain with the NHFD I participate every year in the town's Memorial Day ceremony. Typically the event draws about 50 people. That's all. And the vast majority of them are my parents' ages. Seldom are there any young people or children.
We're missing an opportunity here.

Our freedoms and the freedoms of so many other countries were obtained by men and women who wore the uniform of this country and paid the supreme sacrifice. And Memorial Day is set aside to remember them and express our gratitude.
I realize that there are many other things to do on Monday. And most of them are more fun. But already I know that my own generation has allowed the purpose of the holiday to be about cook outs and the beach. That has been magnified in my children's generation, and I fear that my grandchildren's generation will have no sense of how our freedom was won and preserved.
So, why not take some time Monday to take your children to a Memorial Day ceremony or observance. Several are proudly done throughout Dare, at cemeteries and monuments, either led by veterans' groups or town officials. Your kids will sing the National Anthem, pledge allegiance to the flag, perhaps hear taps played on a bugle or Amazing Grace on bagpipes. They'll see proud veterans - true American heroes - assemble to remember fallen comrades.
Let's teach our children the meaning of sacrifice for freedom. Let's show them what that magnet on the backs of our cars that says "Support our Troops" means.

If they can understand what it means to give your life for others then explaining the Gospel to them will be easier. Isn't that what Jesus did?
Posted by Rick Lawrenson at 9:23 PM 4 comments:

Here's a powerful testimony to the grace of a good God when there is nothing else humanly to be done.

Zac is the brother of our friend, Stacey. I hope you'll watch him tell his story. He died Sunday.

The Story of Zac Smith from NewSpring Media on Vimeo.

A few days ago I pulled a couple of boxes down from our attic, looking for some pictures of old times with old friends. I found a few and was glad to see them. But even better was finding a stack of letters written 33 years ago.

The six months prior to our wedding Gail lived in Portsmouth, VA, her home town and I lived in Lynchburg, VA with my parents while wrapping up my last semester of college. She had finished her college work the previous semester and moved home to work; teaching in an elementary school and to making all the preparations for our wedding.

During those six months we wrote each other almost daily. It was in the dark ages before computers and email and when long distance phone calls were not cheap. Writing letters was still the most cost effective form of communication. It's pretty much a lost art now. First class postage was just 13 cents.

I had forgotten about all the letters. So the last couple of evenings I spent opening the envelopes back up and reading them again for the first time since 1977. It's amazing the details that get lost in the dust of time.

When you're married as long as we have been you should be more in love than ever before. I think we are. (She doesn't know that I've been sitting across the room from her while she works on her laptop, mostly just admiring her.) Certainly our love has matured with the years and through the experiences we've had, good and bad.

But I have to admit reading those old letters and reliving the magic of young love has brought more than one smile to my face. And the fact that she still loves me makes me continue to hold her in wonder; even more so now than then, I think.

Now, if I can muster the courage to open up and read the letters I wrote to her. She thought they were wonderful, and she told me so. But I'm afraid I probably sounded pretty goofy.
Posted by Rick Lawrenson at 11:03 PM 2 comments:

May your children rise up and call you "blessed" today and every day.
Posted by Rick Lawrenson at 8:00 AM No comments:

One of the great thing about Spring is that after hibernating all winter you come out and spend time in your yard planting stuff, etc. At least I have been doing a lot of that these past few weeks.

While pretending to be a landscaper I've found that I get lots of opportunities to talk with my neighbors, whom I don't see much of in the colder months. Sometimes they ask me questions about what I'm doing as though I must know a lot about taking care of the yard. I play along.

Knowing your neighbors has become a lost art in our culture. Maybe it's time to revive it.
Posted by Rick Lawrenson at 10:04 PM No comments:

Kerry Dougherty's editorial in today's Virginian-Pilot truly rings the Liberty Bell. I hope you'll take a couple minutes and read it. (They're a bit slow at the Pilot today with their links. As soon as they have it up I'll post it here. Or you can try to find it yourself at www.pilotonline.com).

Often I'm asked (because of the "controversy") if I pray in Jesus' name when my prayers are in a public setting such as town functions. Frequently I am asked to pray for ceremonies and now commissioners' meetings because of my dual roles as a local church pastor and as a chaplain with our fire department.

My answer is simple: "Praying in Jesus' name is the only way I know how to pray. Anything else would be something less than prayer." Thankfully we have a Constitution that not only protects us from government dictation of what we can or can't believe, but also guarantees us freedom of speech.

Even when that speech is to God.
Posted by Rick Lawrenson at 6:50 AM No comments: