Helicopters and jets were introduced into warfare.

Thanks to all the brave men and women who donned our nation's uniform in Korea in the effort to preserve democracy and halt the advance of communism in that small part of the world. Today South Korea is a thriving free country while North Korea remains a dark place.
Posted by Rick Lawrenson at 11:08 AM 4 comments:

Monday night was the annual Festival of Music in Grenoble, France. I was there with our church band, which was invited by two Grenoble Churches, Le CEP and the International Church of Grenoble, to be part of the festival.

Imagine every street corner and many spaces in between occupied by bands and musicians, all playing for whoever will stop and listen and all for simply the love of music. Downtown Grenoble was full of thousands of festival goers. Our band had an extra motivation - that of sharing the message of Christ through their songs.

For me as a pastor it was one of the highlights of my years of ministry to see a team from our little church in NC being able to do something so special. The crowds gathered to hear this American band (we may have been the only such in the city) and to find with surprise that the band was not only very good, but sang about Jesus Christ in ways that implied they knew Him.

Enjoy the montage, prepared by our friend in Grenoble, Matt Glock.

Posted by Rick Lawrenson at 7:14 PM No comments:

Today I wrap up 6 days in France. Much of the time has been spent interacting with the people here. Some of those interactions have been while walking the streets of Paris and Grenoble. Others have been in church events.

What I've discovered here is that some of my presuppositions about them have been colored by others' judgments. Now that I've met many and seen them up close and personal I have come to the simple conclusion that people in France are much the same as people anywhere else I've been, including in my own back yard.

I will say this for them: their food rocks. My favorite new French word is "patiserrie".

(Too bad their football team has had such issues. I'm told they are an embarrassment to the people they represent.)
Posted by Rick Lawrenson at 8:26 PM No comments: 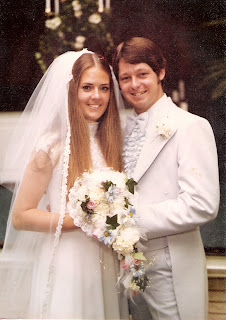 We haven't changed a bit over 33 years!
Posted by Rick Lawrenson at 1:11 AM 6 comments:

On this date (which also coincides with Flag Day) in 1954 President Dwight D. Eisenhower signed a bill putting that phrase into the Pledge of Allegiance here in the US after the words "one nation" and before "indivisible".

I wonder how long it will remain there?
Posted by Rick Lawrenson at 7:51 AM 1 comment:

When the Going Gets Tough...

“Demas has deserted me.” Among the most haunting words to me are these from the Apostle Paul.

Three times in Paul’s letters he mentions his fellow missionary companion Demas. Two of the three times it is clear that Demas is a committed teammate, taking risks and taking Christ to the Gentile world; establishing churches where the religious are hostile to this new way.

Being a Christian in the first century Roman Empire wasn’t without opposition. Believers in the Jewish Messiah were truly counter-cultural and revolutionary – not in political ways, but in discovering life in Christ often meant a life unknown by the world. The Messiah’s call was to abandon all and to take up a cross; to put your hands to the plow and only look ahead. It was a call to self-denial and servant hood. It meant becoming a citizen of another world while living in this one.

While in his final days in a Roman prison Paul penned those words. “Demas has deserted me”. Can you feel the pain in his heart? When he most needed friends and encouragement – someone to assure him that the missional movement he started would continue – one that he had hoped would stay faithful and loyal had dropped out.

Demas, it seems, couldn’t stand the heat so he got out of the kitchen. As he weighed his options he chose the comfort and convenience of casual Christianity. The idea of perhaps winding up like his mentor was a test he would not pass. Imprisonment and execution by a Roman sword took commitment to a level he was not ready to seek.

Haunting words, but, to me they're also helpful.

I know that I have never been put to the test like this. Not really. Sure, there have been times when I’ve had to make what seemed at the time to be a hard choice regarding my commitment to Christ. And I like to convince myself that dropping out is not an option. When I look at Demas I have to think, “But for the grace of God, there go I”. Demas is my anti-hero; someone I don’t want to follow.

They're helpful to me also because as a leader in a Christian community I’ve experienced some level – surely not what Paul experienced – of watching the formerly committed and faithful drop out. And I’ve heard all the “reasons”. And I try to remind myself that it’s not me they’re abandoning. It’s Christ. It’s His family (which you cannot separate from Him). It’s their calling that is deserted.

As I read the Bible and “hear” the words of Christ, Peter, Paul, James and John I know that this journey of faith has potholes and places where there are no shoulders along the road. It can be both treacherous and at the same time daring. Most of all it is a life that doesn’t allow a neutral gear. You’re either growing into His image or you are falling away; with Him or against Him. And we don’t like that.

I’m sure Paul made some effort to convince Demas not to quit. My feeling is that Paul pulled no punches with peers like Demas. He may have felt a twinge of failure as Demas shook his head and walked away. But if it happened to Paul it can, will and does happen to all in the Lord’s service. That gives me some consolation.

But it doesn’t erase completely the pain and puzzlement.
Posted by Rick Lawrenson at 9:37 AM 1 comment:

Just before 2 AM I stood in the rain looking at a 20 something young man's lifeless body lying face down in puddle of water. It was obvious that he had suffered a stabbing in his abdomen.

Across the street is a well-known local watering hole. Last night they sponsored a wet t-shirt contest.

Young men. Alcohol. Young girls willing to make public spectacles of their bodies. Tempers. Mix them together and the result is too often toxic.

One life ended early in the morning hours. Another life will be spent behind bars.

We all make choices every day. Sometimes they can be our last.

What guides you to make choices that are healthy and sane? For me it is a relationship I began with Jesus Christ many years ago.
Posted by Rick Lawrenson at 6:25 PM No comments: