The Drought Is Over!

Pardon me while I celebrate. 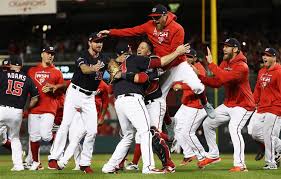 From my first trip to DC Stadium as a 12 year old in 1968, I was a Washington baseball fan. (I'm a native Washingtonian.) Then our team was the hapless Senators, and we were heartbroken when the dastardly Short family moved the team to Texas. It was the 2nd time in a decade or so that a Washington baseball team had been moved. (We don't care for the Griffiths either, who took them to the Twin Cities.)
I adopted both the Angels and the Dodgers as my new teams when my family moved to SoCal. And still cheer for them both (most of the time). But, when the Expos moved to DC it was a great day for the city and her fans. So, last night's winning of the NL pennant means our national pastime's World Series will be played in our national capital for the first time since 1933.
So, here's to you, Walter Johnson, Joe Cronin, Heinie Manush and Goose Goslin. Here's to you Gil Hodges, Mickey Vernon, Camilo Pascual and Eddie Yost. Here's to you, Frank Howard, Eddie Brinkman and Del Unser. The long drought is over.
Posted by Rick Lawrenson at 9:27 AM No comments: