Who's missing the point? 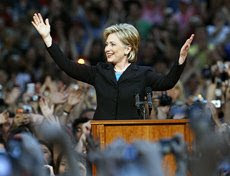 I listened to what I could of Sen. Clinton's speech today suspending her campaign and endorsing Sen. Obama. During the speech I was busy but caught a good portion of it. But I think she missed the point of the whole idea of why we have primaries and nominate candidates.
My concept of a presidential candidate worth selecting is one who has the proven qualifications to lead our nation through these difficult economic times; appoint justices to the SCOTUS who understand the role of the court is not the same as the role of Congress; and be the Commander in Chief of the military. That kind of sums it up for me.
But listening to her today made me realize that in her mind, this whole primary and nomination process has been about race and sex. Over and again she pointed out that a black man or a woman can be nominated for the highest office in the land. And that was what this was all about.
Jeepers. Heck. I bet most of America (including your's truly) would be glad to have a black man or woman as president as long as he or she could do the job. Surely there are many who could. In fact, not only would we go for a black man or a woman, we'd go for a red, brown or any color imaginable.
But was that really what the last months have been about? If so, our economy, our environment, the war, you name it, have dark days ahead. I'm just kinda tired of the race/gender card being pulled all the time. Let's get down to issues and qualifications and experience.
Is it me? Am I missing something here?
Posted by Rick Lawrenson at 5:45 PM

No, Rick, I think you pretty well hit that nail right on the head! :)

I agree that the sexism/racism cards can (and are) be played too quickly and/or too often. However, I do not think the historical nature of this election can be understated and I think that both Clinton and Obama have every right to draw attention to their respective feats. I am thrilled to hear you say that most people should be fine with the idea that a black man or a woman can effectively run this country, but, sadly, I am afraid you are not the norm with those thoughts. Racism and sexism are alive and well--perhaps not as blatently as 40 years ago, but society is still not as open-minded and accepting as it can--and should--be.

Remember, you, as a white male, are the standard by which society is measured so it is easy for you (and me also as a white female) to think that prejudices are less common than they actually are. It's inherently easier for white males in society--it just is. Our country is still run largely by white males and the fact that a woman and a black man made it this far is mind-blowing in many respects.

That said, I do agree with you about being focused on the issues and I think that we will see that in the general election (and honestly that has been the focus in the primaries as well). However, unfortunately many people will vote on single issues or blind loyalty. How many women voted for Clinton because she is a female? How many African Americans voted for Obama simply because he's black? How many people will vote for McCain because he is the Republican candidate? I wish that everyone would listen, research, and make informed and educated choices, but that will never be a reality. Sadly.

As I said, I completely agree with you that the issues need to be the focus, but I in no way begrudge Clinton a moment (or hour!) to bask in the successful breaking down of barriers she has accomplished. No doubt the media will ride this story to death, but I don't think it can be overstated how amazing the feats of both Obama and Clinton are.

Just some friendly thoughts from the peanut gallery! Interesting post!

Just to reiterate what I wrote. I didn't say that the issues were not the focus of the primaries.

What I said was, based on Sen. Clinton's speech, the issues were secondary and the precedent of a black man/white woman running for the land's highest office were the main thing.

Point taken. However, it was her concession speech, not a campaign speech, so I think it was completely valid that she placed so much emphasis on the breakthroughs she and Obama accomplished.