They checked their brains at the bridge 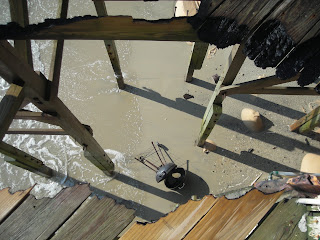 This summer I'm posting about the absolute dumb things I see vacationers do while on vacation here on the Outer Banks. Most of them will be things that could be deadly. I think they check their brains on the other side of the bridge. And I'll update it as I see stupid stuff that I have to believe people wouldn't do at home. If I can identify where they are from, I will.

Two weeks ago our renters from Ohio took the grill off its pedastel and took it up to the third floor deck and cooked up there. Why? (I asked when I found the grill missing). Because it was windy down there. Fortunately they didn't burn down the house, but that's a frequent cause of house fires here: unattended grills on wooden decks. Hello. The wind blows all the time. Get used to it. (The picture is not of my house, but is of one that that happened here recently in a vacation home.)

Tonight on the way home (headed north) on 158 a car from Maryland headed south and the driver decided he wanted to go north. So he pulled a U-turn in the middle of the highway and into my lane right in front of me. I had to go from 50 to 20 in short order. It was one of those little square cars with no acceleration. Then a quarter of a mile later he turned right off the highway as slowly as possible. Hey, it's not a side street; it's a highway. And figure out where you're going before you get on the road.

It's going to be a great summer!
Posted by Rick Lawrenson at 11:20 PM

I am noticing more and more tourists pulling into the center turn lane, stopping, putting on their emergency signals and looking at their maps! Unbelievable!

This morning on the way to church, I was driving in the left lane, and there was a car ahead of me driving in the right lane. Apparently he missed his turn because he abruptly pulled a U-turn from the right lane, whipping directly in front of me. That was a good Sunday morning wake up call for me.

The intern has yet to learn from the wisdom of his elders who say "use the beach road".

haha I actually use the beach road almost every time I drive home, but I usually don't wake up early enough to use it on my way to NHC.

As a note on the beach road, my policeman cousin pulled a car going 75 mph down the beach road a couple weeks ago...seems you can't escape the craziness even on that side.

I have deemed this "my summer of the horn". I'm going to blast my horn at every stupid driving act I see on the highway.

I really understand Ricks point about "leaving the brain" behind. It would be nice to have a huge billboard that says the bypass is not a secondary road, etc., the turn lane is not a third lane for travel, you can't see the ocean from the bypass, use your bikes or walk to go for short tours.

It's still early, but it could be that the West Virginians are planning to overtake Pennsylvania's long-held title to "clueless behind the wheel while on vacation".

@Judith,
How about, "The bypass (158/Croatan Hwy) is not a residential street. You can go faster than 35 MPH." Especially if you're in the left lane.

I almost had a head on with a lady from VA who was heading north in the south bound right lane.

She apparently was trying to get in to a parking lot before the oncoming traffic instead of making a left hand turn from the turn lane.

She had to run off the road to avoid a collision with me. I'm not kidding.