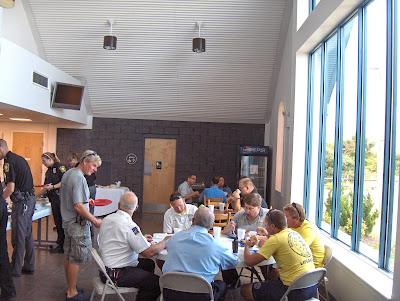 Nags Head Church collaborated with several local restaurants to put on a lunch spread for our public safety community today on September 11. It was our first attempt at this event and it blew me away. I'm usually pretty good at estimating response, and had guessed about 30 would attend. Wrong. Double that amount.
Represented were:

Restaurants participating (they all rock!) were:

Volunteers from NHC who made it happen were George and Paula Farah, Tina Hughes, Jan Martz. Barbara Kay and Andy also worked hard setting up and cleaning up.

So thanks again to our public safety men and women who serve us all so well. And thanks for a church that reached out to them in appreciation and service. God will bless it, I know.

Plan on it being an annual event. I'm going to encourage other churches in our neighboring communities to do the same next year.
Posted by Rick Lawrenson at 2:49 PM

That's awesome! Bummed I missed it...

Food was great! I enjoyed the Butcher Block potato salad and I got addicted to that chicken salad and those funky red crackers.

It was cool to see the lobby of the church full of emergency service folks. I look forward to next year.