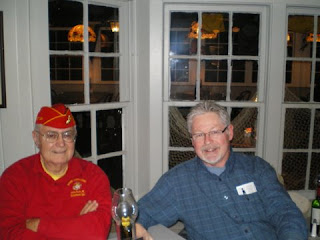 Tuesday night I got to hang out with a few good men. The local detachment of The Marine Corps League had their annual installation of officers and I've been "recruited" to serve as detachment chaplain. The MCL is made up of marines no longer on active duty whose purpose is to support the Corps in various ways. I say "no longer on active duty" because "Once a marine, always a marine".

At the ceremony I met a WWII veteran of the Seabees. Our commandant is a Korean War vet. Looks to me like there are several Viet Nam era marines, and present was a young man still active and just returned from Iraq.

I'm an "associate member" of the detachment because I was never a marine. But until I was 17 I lived in the home of a marine. Dad exited the Corps a Gunnery Sergeant (think Clint Eastwood in "Heartbreak Ridge") just before my senior year of high school. So I'm well versed in marine stuff. These old marines accept me because "if your daddy was a marine, that's good enough for us". Actually my great-grandfather was a marine, too - a veteran of the Boxer Rebellion. He was one of only 295 marines sent to quell the attacks against Christian missionaries in China in 1900. So to be associated with these leathernecks is a personal honor.

You've probably heard the Marines' Hymn ("From the halls of Montezuma..."), but have you ever heard the last words of the last verse?
If the Army and the Navy
Ever look on heaven's scenes;
They will find the streets are guarded
by United States Marines.

That is really cool.

I was born at Cherry Point Marine Base in NC. My father was a marine sergeant who died in 1959, 4 days before my 2nd birthday. I received financial support through his VA benefits and excellent military medical care from the time he died until I graduated from college in 1980. I've always felt a connection of respect to the marines.

What a great story of you honoring our marines. I thought you and your detachment would be interested in learning about another marine, Nick Popaditch, aka The Cigar Marine. Below is a trailer for Nick's book Once a Marine,

Make sure you watch to the very end for a "special" photo message from "Gunny Pop" Nick. I know you will appreciate seeing him.

Nick "Gunny Pop" Popaditch is a former marine Gunnery Sergeant, a Silver Star winner, a 15-year veteran of the USMC, and was widely known around the world as "The Cigar Marine:" (Google it.). His tanks captured Firdos "Saddam" square in April 2003 and pulled down the hated statue. Nick was severely wounded one year later with an RPG to the head, which was captured live by a media news crew. He had to fight his way through an incredible odyssey of turmoil, heartbreak, and bureaucracy to recover everything he had lost. His website is www.onceamarine.com.

We appreciate your support of Nick and his family in any way you are able. The success of this book will open doors for this blind warrior, and hopefully provide revenue and success to someone who has sacrificed so much for his country. If you would like to purchase Nick’s book, please call 916-941-6896 or www.savasbeatie.com.