Vaccination? Yes, I will. 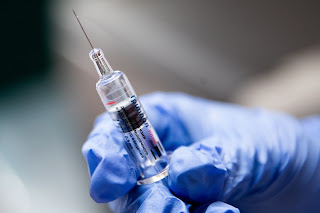 My rationale for getting the vaccine is simple.

First, I'm not a conspiracy theorist. I pay no attention to hype that has no factual basis.  Really, who thinks big pharma or the government or some mega rich guy really wants to wipe out the population of the world.  I've read ahead about the world's future, and we're not ready for something like that.
Second, since I was a child I've gotten vaccines - small pox (remember those?), polio (remember the sugar cubes), flu, and so on. I grew up in an era before many vaccines were available, so I contracted the measles and mumps. No fun! But, I've never had polio, small pox, whooping cough, diptheria, flu - all those things for which I was vaccinated.  Heck, I just got shots for pneumonia and shingles because neither illness is attractive to me.
Third, since I really don't want to get sick with COVID-19 I'll take the chance on this new vaccine. Some ask, "What if the vaccine gives you the virus?". Looking at the testing of tens of thousands, that's not likely. And if it does, so be it. Without the vaccine I probably would have gotten the virus at some point, so I'll go with the possibility (and minimal risk) that the vaccine will give me immunity.
And fourth, if I get the virus and die from it, I'm ready for what comes after that. Death has no sting for those in Christ. I'm covered by the most amazing insurance policy: the death of Christ who forgave me of my sin when I believed in Him.
So, look for me in line. I'm 65. I have an underlying medical condition. I have a daughter-in-law who I can't risk catching something from me. So, give me the shot and soon.
Posted by Rick Lawrenson at 8:06 AM

You can tell them they can't get the virus from these vaccines because it's a new type of vaccine where the virus isn't even used in the production of it. Just some of its DNA patterns. So there's no virus - not even dead virus - in the vaccine.

Good to know, Rob. Thanks.