The Purpose of Memorial Day 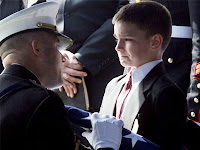 I remember well the day we drove my dad to the train station in Rocky Mount, NC.  I was ten.  I would not see my father for another 13 months.  That train took him to Camp Pendleton, CA, where for a month he trained for survival...training he would need for the next year in Viet Nam.

I remember seeing him for the first time when he came home.  A year separated from your dad at that age is a chunk of life taken away.  But I'm proud he served.

However, I will not be honoring my dad this Memorial Day.  That little boy in the picture could have been me, but I'm thankful it was not.  And, no, I'm not making some kind of anti-war statement.  If you think that, you don't know me.  I'm as red-white-and blue as anyone, and thankful for all who wear our nation's uniform.

But my dad came home from the war alive.  So, Memorial Day isn't about him or others like him or those currently serving in our military.  It's about those who died while fighting for freedom, from Bunker Hill to Afghanistan, whether it was ours or the freedom of some foreign nation.   And dad didn't die fighting.  In fact, he's still alive (and very much still a Marine).

It's important that we remember those who died.  So, God willing, I'll be attending a Memorial Day ceremony this Monday to honor the fallen and thank them for the freedoms we hold dear as Americans.  If we fail to remember we will soon forget, and those freedoms, once worth dying for may become trivial.

And Dad?  He'll get his day on 11 November -
Veterans Day when we stop to honor all who have and are serving under Old Glory.

I just think we should get it right.
Posted by Rick Lawrenson at 10:53 PM